What is an HVAC System and How Does it Work? 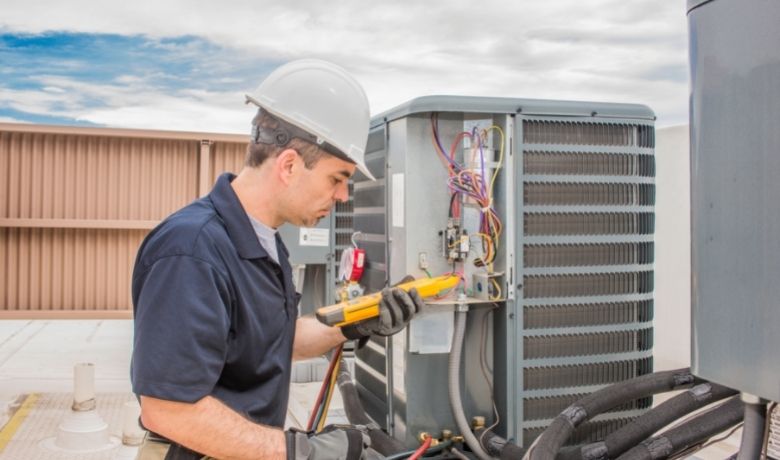 What HVAC stands for

An HVAC system is a mechanical system that provides heating, ventilation and air conditioning to buildings. It is made up of various components including compressors, condensers, evaporators, vents and ducts. HVAC stands for “Heating Ventilation Air Conditioning.” What does this mean?

Well it means that the HVAC system can provide either cooling or heating depending on what you need inside of your home or office. Inside these homes and offices are coils that heat or cool the air before it is circulated through the building’s walls. If you want even more information about how an HVAC system works then keep reading.

How Does An HVAC System Work?

An HVAC system is made up of two parts: the air handling unit and the distribution system.

The primary job of an air handler is to provide a comfortable temperature within your building by maintaining a balance between heating, cooling, ventilation, humidity control and filtration needs. It does this with systems such as electric blowers which force heated or cooled air throughout the ductwork using fans and dampers that regulate airflow; humidifiers for adjusting indoor relative humidity levels; filters for removing particulates from outside air before it enters your home’s living space; electronic controls like thermostats that help keep you at selected temperatures all day long – several days in advance!

In order to distribute air throughout a building, ductwork is used. Air handlers and other equipment release conditioned air into the system by pulling it through your home’s supply registers or vents (in some cases). The distribution system routes airflow via large metal pipes containing many smaller diameter flexible pipes within them called “ducts.” These are then distributed to individual rooms for heating and/or cooling as needed.

The outside unit also has an important job of removing condensation from the refrigerant lines before this water can damage electronic components in the compressor section. Condensation is a natural byproduct of the refrigeration process.

Before beginning, it’s important to note that there are two basic types of HVAC systems:

– Heating Systems (in which air outside your home is heated).

Now let’s talk about how an AC system works.

Air conditioners work by removing heat from inside the building through any or all three methods – condensing, evaporative cooling, or simply blowing in cold outdoor air. The first method uses a tube filled with coolant fluid running alongside another tube filled with gas such as Freon® under high pressure.

The process of heating a home or office with an HVAC system includes two primary sources: convection and electric resistance. The most common type of heater in the United States is called a furnace, which transfers heat from outside to inside through hot air that rises by natural convection. You may also have what’s known as a boiler system where water heats up on your property at one location (such as under your house) and then travels into pipes throughout the building. These systems are usually used in colder climates because they don’t use electricity.

The process of cooling a home or office with an HVAC system includes two primary sources: evaporative and electric. Evaporative coolers are what you typically hear about in movies where someone is standing over a bucket of water while it’s being sprayed into the air. These systems work by turning water to vapor, which penetrates deep into your space and then condenses back into liquid form on the other side when it comes across cold surfaces like windowpanes. In contrast, air conditioners use electricity to produce either hot or cold coils that transform refrigerant from gas to liquid state before releasing it outside as cooled down liquids called Freon-12 (the type used in most modern AC units).

﻿HVAC systems also include ventilation. Ventilation is the process of bringing fresh air into a space, and exchanging stale or polluted air for that fresh supply. This can be done through various methods including natural circulation (opening windows), mechanical fans to manually force airflow in specific directions, and heating/cooling units with built-in exhaust capabilities designed specifically for this purpose. The effectiveness of your HVAC system depends on how well you maintain its components, which includes working vents and filters that keep out particles like dust and dirt from circulating around the room while still letting enough oxygen come in.”

is also an essential component of a HVAC system. Air conditioning systems use refrigerant to remove heat from the air by extracting it and transferring it out into the atmosphere outside your home or office.

What is included in an HVAC system?

We know that these three are the main parts. The heating element, for example, might refer to a furnace or boiler and include pipe systems as well. Air conditioning can be forced air with duct work if needed- it’s often used for air cleaning purposes too! And when someone refers to ventilation they may mean either natural venting or forced; both of which clean your home’s atmosphere

What Is The Difference Between HVAC And Air Conditioning?

HVAC stands for heating, ventilation, and air conditioning. Air conditioners are a part of the HVAC system that helps to regulate indoor heat in summer months by removing excess humidity from the home. They also release cool air into your home during winter so you can avoid using potentially dangerous space heaters or electric blankets with cords when you’re at home.

How long does an HVAC system last?

If you maintain your air conditioner properly, it can last up to 15 years. You should replace your filter once a month and make sure the vents are clear of debris so that they don’t clog or reduce airflow.

What Causes A Furnace To Shut Down?

There may be several reasons as it could also be caused by other systems in the home like power outages for instance. However, if there is water around any electrical connections then that will cause the furnace to stop working until all moisture has been removed from the area and everything has dried completely before turning on again.